His article “December on the Danube” won first place in the Magazine-International category of MTJA’s annual Mark Twain Awards. The story captured the magic of Europe’s Christmas markets as experienced on a Danube river cruise from Nuremberg to Budapest. Mink scored a second-place award for his story on Buenos Aires, Argentina, and a third place for his article on San Juan, Puerto Rico. 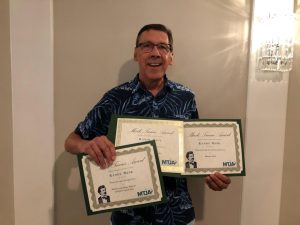 Mink this year is observing the 50th anniversary of his first published travel story. Titled “Lake of the Ozarks’ Spring Offerings,” it appeared April 11, 1971, in the Chicago Tribune travel section. Randy at the time was a senior majoring in journalism at the University of Missouri. He has spent practically his entire professional career as a travel writer/editor for newspapers and magazines, starting as a freelancer for Sunday newspaper travel sections and then becoming editor of TravelAmerica magazine in 1991. He joined Premier Travel Media, publisher of Leisure Group Travel and other group travel magazines, in 2008.

Early in his career, he spent time working in student travel offices, serving as an Amtrak reservations agent and leading tours for student and senior citizen groups. He has been to 46 states, visited 70+ countries and taken 47 cruises.

Leisure Group Travel is the flagship publication in the Premier Travel Media family of brands. For more than a quarter century, it has been recognized as the leading magazine for professionals in the U.S. group travel industry.